A Rochester Institute of Technology (RIT) researcher is taking solar sailing to the next level.

He proposes replacing reflective metallic sails with diffractive metafilm sails. The new materials could be used to steer reflected or transmitted photons for near-Earth, interplanetary and interstellar space travel.

At the same time, Swatzlander also mentions that, “Diffractive sails may also be designed for laser-based propulsion, a decades-old concept that has recently attracted significant interest from private investors, resulting in a program called Breakthrough Starshot.”

At a weight of 5900 pounds, CIMON is a verbally communicative device, and will also communicate step-by-step instructions to astronauts during three planned science experiments. It will return to Earth on December 13.

As is common knowledge about the group think effect, in which humans that spend long periods of time in isolation are driven to make irrational decisions, it is believed that robots like CIMON can help counteract such a situation and prove useful in the working of the space station. CIMON can help mitigate the disorientation astronauts may feel in space.

The moon will turn orange on January 31st to share the sight of a rare celestial spectacle!

Being the second full moon of the month, hence called Blue Moon, and the first eclipse in the new year, this will be quite a view.

The lunar event on January 31st will occur for the first time in 150 years, thereby giving sky-gazers a once-in-a-lifetime chance to view it.

The duration of the total phase is 77 minutes, with the moon tracking through the southern part of the Earth’s shadow.

This is just an image of the article I was reading today. It basically showed how big the universe is, and our solar system is but a very very small part of it. 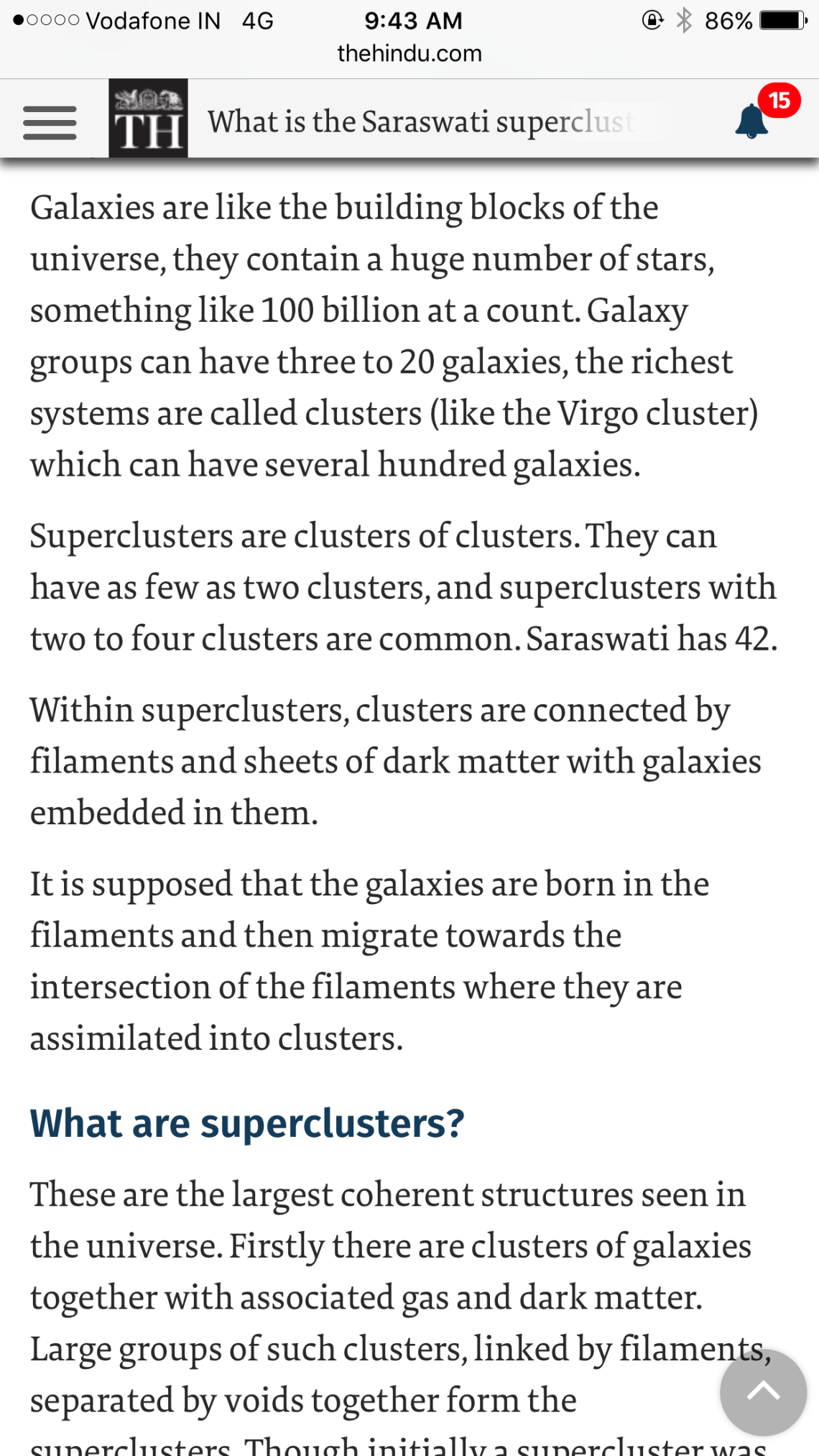 So think big, and keep that passion alive in you! You can achieve anything you want to!

Eventually, there will be a nuclear war, or an asteroid collision on Earth or a rogue AI, or environmental destruction that might cause problems to live on Earth. Well those are some of the few reasons Elon Musk is so interested in the Living in Mars concept or inter-planetary capabilities.

According to Elon Musk’s timeline, if all goes smoothly, the first manned mission to Mars can be held as early as 2023. And the idea of transferring 1 million people to Mars, thus starting a civilization, can happen in 40 – 100 years.

The lift-off thrust from the Earth will be 13,000 tons, quite tectonic, for a rocket to speed by and reach Mars in as many as 30 days. However, currently the cost per person to travel to Mars comes out to an approximate $10 billion, which should be reduced by 5 million percent according to Musk. Reducing the price will allow more people to travel to the red planet.

The spaceships design has been summed up as not complicated, however the critics point out that it runs contrary to the reputation of this field of science.

A Mars vision, and sending a million people to the planet within 40 – 100 years. People won’t be wrong of calling Musk overly-ambitious, however he does hold on to what he says, like the re-usability of rockets, that is saving millions of dollars for everyone. So keep your fingers crossed.

Elon Musk, the CEO of SpaceX and Tesla, mentioned that human colonies on Mars are possible in our lifetime. He also described the options for expanding to a space-bearing civilization and the advantages of Mars. He compared possible spaceships and rockets designs and performance features.

At present, the major challenge that faces engineers and scientists is the need to reduce cost per tonne of transporting materials to Mars by five million percent.

Musk also mentioned that as seen in history, there always is an extinction event at some point that wipes the entire civilization aka doomsday event. Human will be extinct if they stay on Earth forever. And the alternative to that will be to become a multi-planetary species.

Considering no physical samples of Jupiter is available like of Earth, Mars, moon, asteroids, etc., isotope signatures of meteorites (derived from asteroids) were used to determine Jupiter’s age.

By looking at tungsten and molybdenum isotopes on iron meteorites, scientists found that meteorites are made up from two genetically distinct nebular reservoirs that coexisted but remained separated between one million and 3-4 million years after the solar system formed.

Thus the best explanation is that Jupiter was formed, which opened a gap in the disc and preventing the exchange of materiel between the two reservoirs.

Now we know the oldest planet in the Solar System. I wonder how old the other planets such as Saturn and Neptune are. It’s wonderful that we are knowing more and more about space as we explore.

Our Universe is a big chunk of stars and planets with some pretty extreme environments and weather. Here is a brief list:

Hottest Planet: Having a temperature of over 4,300 degree Celsius, KELT-9b is a Jupiter-type gas giant planet that is so close to it’s star that it only takes 1.5 days to complete 1 revolution. (Earth takes 1 year = 365.25 days)

Coldest Planet: Having a temperature near absolute zero, OGLE-2005-BLG-390Lb is the coldest planet at – 223 degree Celsius. The planet is 5.5 times the mass of Earth and sometimes also referred to Hoth from Star Wars franchise.

Biggest Planet: The planet DENIS-P J082303.1-491201 b, has a mass 28.5 times that of Jupiter. It is often debated whether to categorize it as a star or planet. However, it revolves around a brown dwarf star.

Smallest Planet: Kepler-37b is considered the smallest planet, having a size smaller than Mercury and slightly larger than Moon. The planet lies very close to its star and is too hot to support liquid water.

Oldest Planet: At 12.7 billion years, PSR B1620-26 b is the oldest planet. It is 2.5 times the mass of Jupiter. Considering the universe is 13.8 billion years old, the planet is only a billion years younger.

Youngest Planet: V830 Tauri is a planet that has only been there for 2 million years. The planet is 3/4th the mass of Jupiter and still seems to be growing by frequent collision, making it unsafe.

Planet with the Worst Weather: Since lack of technology prevents us from seeing the weather of planets outside our solar system, Venus is the planet with most extreme weather with temperatures ranging to 462 degree Celsius, and hurricane speeds at 360 km/hr. The planet is made up of 95% Carbon dioxide.

This is incredible. There are planet with such varied mass, temperatures and weather. We are but a small dot in the universe.

Curiosity rover, the NASA’s rover on Mars, has found a variety of minerals on the red planet. These layers of rocks are predicted to have been deposited about 3.5 billion years ago, coinciding with a time on Earth when life was beginning to take hold. In fact, early Mars could have been very similar to early Earth.

Four samples were drilled near the base of Mount Sharp:

Buckskin sample had tridymite, which is rather strange considering that the mineral is found from partial melting of a planet’s crust (such as Earth’s crust), and Mars is assumed to never have had tectonic plates

Confidence Hills and Mojave 2 sample had clay minerals, generally formed in the presence of liquid water with a near-neutral pH.

There were several other minerals found. So, since Mars had a habitable environment in the starting, could it be that there was life on Mars and was later wiped out? or rather life managed to reach Earth from Mars?

An experiment conducted by NASA might color the skies over the US mid-Atlantic coast with bluish green and red clouds. The experiment was scheduled for Sunday evening, in which NASA seeks to learn more about charged particles at the Ionosphere (Earth’s top most atmosphere layer).

A small rocket carrying 10 canisters of barium and other chemicals is due to lift off from Wallops Island, Virginia. The canisters (about the size of soda cans) will be launched and they will release blue-freen and red vapors, forming into artificial clouds visible from New York to North Carolina.

The colors are produced due to the chemicals barium, strontium and cupric-oxide interacting with the sunlight.

Well. Indeed. It might be a colorful day for New Yorkers.